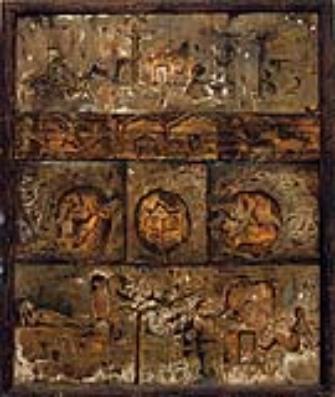 "I do not try to make my paintings pretty, I want them to be strong. They must stay in your mind and force you to think about them."

The late Yassin Mohammadawi was born and raised in Iraq by the marshes. In 1983 he was granted a scholarship to study in Italy, after which he went on to study at Cardiff College, University of Wales obtaining a Bachelors in Fine Arts in 1989. He later obtained his Postgraduate Diploma from Southampton College, England. Mohammadawi lived out the last 13 years of his life, passing away in 2002 at the age of 47.

Yassin reaches deep into his homelands rich historical depth as inspiration for his works. There is evidence of Babylonian, Assyrian, Sumerian and the relatively modern Iraqi heritage in all his pieces. Combining old with new in ways that only an artist can. Mohammadawi ventured away from the conventional medias used on a canvas, one might find a mixture of clay, chemicals and mud used right alongside acrylic making his pieces quite fragile.Common motifs that run through his paintings are life in rural Iraq, birds, animals, children, calligraphy, and love. His technique is what makes his style so original. He first sculpts the painting and then follows with a variety of procedures such as washing it, burying it in mud for a few days, smudging with salt and natural materials and even at times burning it, all in an attempt to engage a conversation with the work and the earth. He also made his own paints and colours using natural materials such as clay, algae, coffee, salt and even grass. This made his pieces look like they were borne of the earth, a true representation of the geographical elements the artist tried to portray.