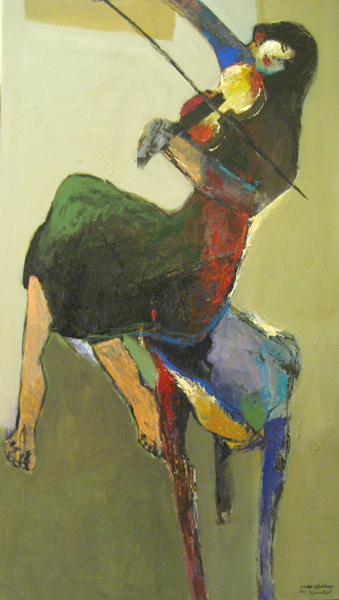 "Inspiration for a professional artist is not easy. I work from my memory, which is full of beauty,love, happiness and awareness of art."

Since his birth in Lattakia, Syria in 1957, Suheil Baddor has gone on to live a life that is as exuberant as the works that he creates.He attended Damascus University, initially studying Philosophy for one year before moving onto art where he was taught by masters such as Saaid Moakhlof and Fatah Al Moudares. He had his first solo exhibition in 1979, a time when he was working as a singer and actor. Also a poet, he published his first book in 1986, going on to publish another two in the following decade. After his first book, he spent the next 2/3 years cycling from Damascus to Paris as part of the 'Traveller for Peace 'Journey, throughout which he taught art all over Europe.

As an artist he became an avid sculptor as well as painter and throughout the course of his career participated in over 35 solo exhibitions, with almost twice as many collaborative exhibitions, even going on to run his own galleries in Dubai.Baddor's style is difficult to pin down, however he mostly operates in an Expressionist style, adding in elements of abstraction at times, sometimes even some cubism. His technique is structured and simplistic yet filled with texture and a vibrant energy. Primary colours and shapes dominate his works to create energetic pieces. His works reflect people and their emotions, he loves to depict females as he sees them as the source of life, none more so than his own mother. He also focuses on music- instruments, rhythms and movement are abundant in his pieces.